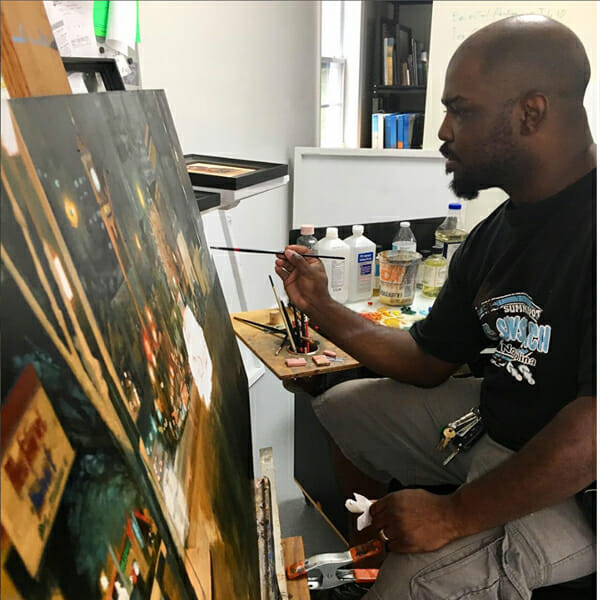 “ I didn’t come from a family of artists, I wasn’t top of my class or win a lot of awards but I’ve always had a strong work ethic and the passion to work on my craft.”

Born in Myrtle Beach, South Carolina and raised in Richmond, Virginia he discovered his love for art at a very early age. With little interest in anything else, Steven took the next big step towards his pursuit of a career in art when he earned his bachelor’s degree in fine arts at Virginia Commonwealth University. He would later earn his masters in fine arts from Marywood University, where he also met his wife/ fellow artist Evelyn.

Instant success was not in the cards as Steven continued showing at a string of coffee shops, libraries and other businesses.Eventually his hard work paid off with a few local awards that soon caught the attention of two gallery owners. Since his venture into gallery life, his landscapes have been well received by collectors as his paintings are part of several private collections such as Airstream Inc., Hilton Hotels, the Boy Scouts of America, Dominion Resources, Virginia State Department, the National Parks Service, the Columbus Convention Center and the United States Air Force.

He has participated in several artist in residency programs in Michigan, Indiana, Iowa and Colorado. In 2014, he was selected to create the Ohio Governor’s Art Awards by the Ohio Arts Council and in 2015 he received honorable mention in the Southwest Art Magazine’s Artistic Excellence Competition.

Steven continues to work hard on the advancement of his career, with the assistance of his lovely wife Evelyn and studio assistant/daughter Poppy. Currently, his work is represented in Kentucky, Washington State, Ohio, Georgia, North Carolina, Virginia, Oklahoma and Washington, D.C.

“I should have quit years ago but that would have proven so many people right.” – SW

“There’s a solitary elegance that I try to capture in all of my paintings.It’s all about engaging the viewer in “the moment”, whether it’s a quaint country house on a sunny day or a storm approaching an empty field.I have a fascination with the simple life and the sights that are often missed along the side of the road. We often find ourselves too caught up in the hustle and bustle of life to take time to just take notice of the land around us. To capture a forgotten area or structure in a single moment in time and to be able to share that experience with others is what makes the creative process worthwhile.”

The Turner Center for the Arts is committed to providing a website that is accessible to the widest possible audience, regardless of technology or ability. We strive to conform to the accepted standards and guidelines in our effort to make our web content more accessible for people with disabilities. While the Turner Center strives to adhere to these accessibility and usability standards, it is not always possible to do so in all areas of the website. We are continually seeking out solutions that will bring all areas of the site up to the same level of overall web accessibility. If you experience any difficulty in accessing any information or pages on the Turner Center website or have any suggestions on how we can provide a better experience, contact Jessica Ganas at jganas@turnercenter.org or 229.247.2787.